When all else fails, you need to be able to protect yourself in the event a threat has crossed your path. Maybe you have implemented everything we have talked about, a home security system, stronger locks, blinded all your windows, and brought home a pack of wolves. By this point, if an intruder has entered your home, they are systematically out to get you, and you need a way to protect your family. You need the best home defense weapon money can buy.

Or perhaps you are saving up money to buy the best system money can buy. Until you can implement all the right security measures, you still need a way to protect your family! You should always have a Plan B. And Plan C, and Plan D… however, too many defenses can potentially make you a target. If you are the only home on the block with razor wire on the backyard fence, well now intruders accept the challenge. Fortunately all of these topics are low key and blend well with your day to day lifestyle.

When you are in your home though, you want to keep the intruder as far away from you as possible. In the ongoing frenzy, you want a weapon that requires less aiming and more eliminating the threat.

You also want the best home defense weapon that you are capable of wielding. A 12 gauge shotgun that is loaded with buck shot may knock your shoulder out, but will quickly get the point across to the intruder. A collapsible baton, or night sticks like the police use, is much easier to handle, and each swing is going to land somewhere on the victim, but requires you to get close.

This multi-purpose self defense mechanism can be carried with you anywhere. They typically come with a carry bag so you can have it ready to deploy in seconds. The tip of the baton has a hardened steel ball, which when delivered to your threat, can cause serious injury. I remember the days when we were in middle school, and we would wad up masking tape in to small, tight balls and throw them at each other as hard as possible. If you know what I am talking about, you remember it hurts!

The small surface area of the steel ball is what really makes this baton a great choice. The smaller ball inflicts more pain than a baseball bat would because you are delivering the same amount of energy on a smaller area (this takes in to consideration the SAME amount of energy, delivered by the same person at the same speed. Dwayne the Rock Johnson could do more damage with a baseball bat, but the last time I looked in the mirror I looked nothing like him).

It’s like having a compact and hardened baseball bat that inflicts pain like a whip. And you can take it with you! What a friend to count on!

While a baton can inflict serious pain, the attacker can still advance. With the taser, not so much. You have probably watched the YouTube videos, but the taser will stop a person in their tracks, and leave them squirming on the floor. Tasers come in a variety of shapes and sizes and are the same units law enforcement utilize. The preferred taser for home use should be something with a little bit of reach. Most hand held tasers fit in the palm of your hand, and look much like a handgun. When an intruder is breaking in to your home, you want to keep your dis

tance from them as much as possible.

Tasers have replaceable cartridges with two electrodes in each. When you pull the trigger, the two electrodes shoot out at up to 30 feet. When the electrodes make their mark on the threat, just hold the trigger down and let the show begin. Your attacker will be suffering from Neuro-Muscular Incapacitation, also known as the shock of their lives. This gives you the ability to handcuff them or subdue them further in time for the cops to arrive.

Stun guns are different, the electrodes are fixed in the unit, meaning you have to get within arms reach to place the electrodes on the threat. If the threat is carrying a knife, this will not work. There are stun guns that double as powerful flashlights, and come in 12 to 19 inch lengths, keeping the threat at arms length.

The flashlight portion of the stun gun can easily disorient and completely blind the intruder. I have tested this on myself before, and I was an idiot for trying. But for your benefit, you should know that I looked directly in to a 300 lumen flashlight in the middle of the night. Not only did it quickly blind me from seeing anything, it left a large black spot that blurred the majority of my vision for the next few minutes. You can imagine the advantage you will have when your intruder can literally not see you.

Check out this neat stun gun flashlight combo. It weighs a bit, but has all the features you need to incapacitate a threat right quick. It features 2,000,000 volts and mutliple flashlight modes. The end of the flashlight is sturdy enough to wield as a baton as well. So swing, flash, and zap away!

These stun guns are non-lethal and don’t have the loud bang associated with them, although they do have a very loud and intimidating electrical sound to them, which may be enough to scare someone. One hard zap from a stun gun and you won’t have to worry about anyone advancing at you any longer.

Nothing is more universal than the sound of a pump action shotgun racking in the middle of the night. It screams at the intruder to GET OUT before you unleash their worst nightmare on them. The only problem with a shotgun, is the damage it can do to your home, and your family if aimed in the wrong direction. Shotguns can blast through walls, which can reach unintended victims. 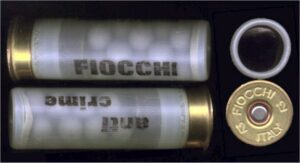 We don’t want that, which is why if you are not well versed with a shotgun, but want one for the ultimate in home protection, there are non-lethal rounds you can purchase for the purpose of home defense. These rounds are typically made from rubber or compressed powder, and much like a bean bag launcher that riot police use, will put a threat out of commission right away. Some of the non-lethal rounds are designed to dissipate in to powder the moment it hits a solid object like a wall, so you can be rest assured that the rounds don’t hurt anyone on the other side. Non-lethal rounds don’t have the kickback of normal shotgun rounds either, making a shotgun easier to handle.

The shotgun is the preferred choice for home defense because of the spread of the ‘shot’. You don’t need to aim precisely for one of these rubber balls to land on the intended target. As always, much care and attention comes with the ownership of a shotgun, but it is easy to learn and there are many classes you can take to become well versed.

That’s right, YOU are the best defense weapon in your home! Being able to take on an attacker fist to fist is the best thing you can teach yourself. Hand to hand combat is your go to choice when it comes to protecting yourself and your family. Martial arts, karate, jiu-jitsu, they have not been in use for thousands of years just because it is good exercise. While you still want to utilize the weapons noted above, learning hand-to-hand combat is a skill you can take anywhere with you, and each form of combat is respectfully powerful.

And do not underestimate your size or abilities! Hand to hand combat trains you to

use your body in the most effective way, exponentially making you more powerful than you believe. A swift knuckle punch to the throat will hurt anybody, or a swift kick in the groin, I don’t care who you are, you are slowing down significantly at least.

Regardless of your choice, it is important to train with your home defense weapon at least a few times a month so you are comfortable with it and fully knowledgeable of your weapon. Buy all of these tools and place them around your house, so no matter where you are when the unexpected happens, you will be ready. Bring on the pain to anybody that wishes your family harm.

How To Improve Situational Awareness

Tue Aug 27 , 2019
Spread the newsBeing able to protect your family and your home comes with more responsibility than just relying on technology and weapons to protect yourself. In the last article, I mentioned at the conclusion that YOU are the best home defense weapon available. This is because protecting what you love […]